One of the most anticipated accessories to be released in early 2012, the GoPro Wi-Fi BacPac + Remote kit is bound to be a popular accessory for anyone with an HD Hero 2 camera! It will be even more popular to those with more than one.

With this new GoPro remote, you can now Wi-Fi-enable your HD HERO2 or original HD HERO camera with the Wi-Fi BacPac and Wi-Fi Remote.

The Wi-Fi BacPac will attach to your GoPro HD Hero 2 camera via the expansion port on the back to enable long range video remote control via the Wi-Fi Remote or even a smartphone, tablet, or computer running a free, downloadable GoPro Application. 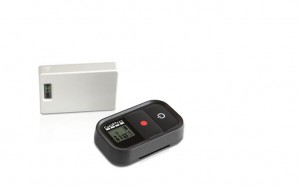 The GoPro Wi-Fi BacPac will be able to control up to 50 HD Hero 2 cameras at a time!

The Wi-Fi Remote kit will be waterproof and very durable. This will be very helpful to those who make huge productions with multiple GoPro Cameras … calling Ken Block!

When paired with the Wi-Fi BacPac, the HD Hero 2 will also be able to support live video streaming and remote control via smart-devices, computers and the internet wherever Wi-Fi or a mobile hotspot is available. This means you can record one video stream to your Hero 2′s SD card while sending a second video stream via Wi-Fi to your smart-device, computer or the internet!

I want the GoPro Wi-Fi BacPac! When can I buy it?

It is scheduled to be released in the first quarter of 2012. February has been mentioned a few times for the North American market release of the GoPro Wi-Fi BacPac and Remote Kit.