Which GoPro Backdoor Should I Use?

This question regarding which GoPro Backdoor to use pops up occasionally. It’s quite obvious when it comes to certain situations like shooting underwater for example but here is some additional information so you can make the best decision. 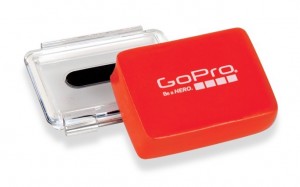 In any situation where water might be present, use the waterproof GoPro backdoor!

This includes wakeboarding, kiteboarding, scuba diving, swimming and even snowboarding. If you’re snowboarding for example, if you’re using the skeleton or open backdoor, snow might get inside the housing and due to the heat coming off the camera, the snow will eventually melt and turn to water. Any water or moisture that gets inside the camera can really mess things up so don’t take any chances. As always, in any situation where the camera will be on the water, make sure that you have a GoPro Floaty or a leash tethered to the camera so that in the event it falls off its mount, it won’t sink to the bottom of the lake or ocean! I’ve actually seen some videos of this happening. I’ve even seen one video of someone managing to get theirs back but only due to the fact that the lake was shallow.

Another thing to keep in mind is that the GoPro microphone will not pick up all the sounds with the waterproof backdoor compared to the open backdoor. So if you’re in a situation where there is a loud engine for example, it’s almost always better to use the closed backdoor. The sound is going to be very loud and boomy with the open GoPro backdoor. You’ll want to replace the audio with music 99% of the time.

The Hero Camera will record a lot of the wind noise with the open GoPro Backdoor.

The GoPro microphone picks up a lot on ambient noises and wind noise is no exception. If you have the GoPro Camera mounted on a car or on a plate, chances are you will be going fast enough to create wind noise. This is another reason to use the closed/waterproof backdoor which will have zero wind noise. The downside is that you won’t hear the engine noise that you want to hear.

There are some solutions to get the best audio quality out of your GoPro though! You can either purchase the Micover Stickover for the GoPro. This product is a synthetic fur that attaches to the back of the open GoPro Backdoor and basically eliminates almost all of the wind noise at reasonable speeds. The other solution is to purchase an external microphone. These can get pretty expensive though ($100+ at minimum for a decent one). You will get great sound quality with one of these.

Hopefully this clears up any questions you had regarding which GoPro Backdoor to use!